The main guide for this section is the ‘Setup for Failover clustering and Microsoft Cluster Service’ whitepaper. It’s a difficult topic to test in a lab unless you’re lucky enough to have FC in your lab! Very little has changed in regards to running MSCS on VMware since the VI3 days so if you’re familiar with that (and it was on the VCP syllabus) then don’t read any further! If you want a refresher however (and a few tidbits which are new to vSphere 4.1), read on….

One of the main requirements is a FC SAN (this is one of the rare features which doesn’t work with NFS).

Features you can’t use in conjunction with MSCS;

For all three solutions you follow a similar process;

Cluster in a box

Follow an almost identical process to cluster in a box with a few exceptions;

Follow a very similar process to cluster across boxes with a few exceptions;

Note:If using Windows 2003 you must configure the Microsoft Cluster Service to use the ‘minimum configuration’ option.

There are a few extra constraints when using standby clustering;

This is a new feature introduced in vSphere 4.1. Previously an MSCS cluster wasn’t supported (by either Microsoft or VMware) if it resided in a cluster with HA or DRS enabled, even if you disabled those features for the VMs in question. This meant using separate hardware which negated some of the benefits of virtualisation. By using VM-VM and VM-Host affinity rules it’s now fully supported.

VM-Host affinity rules are used to compensate for the fact that HA doesn’t obey the above VM-VM rules (whereas DRS does). 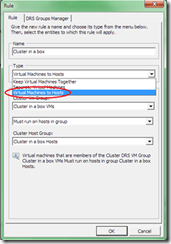 For cluster in a box

For cluster across boxes

Personally we only run physical Microsoft clusters at both my current and previous employers, so I’ve no real world experience of implementing the solutions covered here.

Microsoft have very limited support for clustered solutions – it must be running a certified architecture (which includes hardware and software configuration);

Exchange CCR – see this blogpost at VMGuru.nl for a good discussion around this, also this VMware community post. Exchange 2010 (when used with DAGs) has it’s own issues – see this post.