Summary: I’ve found Google’s Chromecast to be a great streaming device but in rare cases it can misbehave and cause wireless access issues.

I bought my first Chromecast the day they were released in the UK (March 18th 2014), totally by chance, and I’m a big fan. Once setup they’re simple enough to use that my 2yr old son can now use a tablet to power on our TV and watch a program of his choosing via BBC iPlayer or Plex without any help from me – and that’s something my in-laws can’t manage. I’m not sure it’s socially a good thing but at least the technology works! 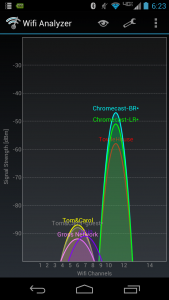 However I have noted a few issues, notably with their use of wifi. When you first plug in the Chromecast it’s in ‘master’ mode which means it acts as an access point, thus allowing you to join its wireless network with a tablet and configure it (and also opening up at least one vulnerability). Once the initial setup is complete however it’s supposed to go into ‘managed’ mode which means it should stop being an access point and act only as a wireless client but mine was still intermittently acting as an AP and therefore causing interference, as seen by Wifi Analyser (highly recommended by the way). In my case (and for others too) I saw additional wifi signals, always on the same channel as my home wifi, and the signal strength was greater than my home wifi http://premier-pharmacy.com/product/adipex/ when I was near the Chromecast. The Chromecasts online pharmacy belgium didn’t broadcast an SSID (it showed as ‘?’ in Wifi Analyser) with a MAC address starting in fa:86:ca, which belongs to Google (although none of the OUI lookup databases seemed to know it).

This useful article about how Chromecast uses the Wifi network, including packet captures, goes into some possible causes although it’s been 18 months since the Chromecast was released and firmware updates may have resolved some issues mentioned.

The fix, at least for me, was a factory reset of the Chromecast – hardly worth of a blogpost! However I’d ‘reset’ mine several times by simply going into the Chromecast utility on an iPad (or Android tablet) and after a reboot I’d go through the setup again (inputting wireless password, naming the device etc) and that DIDN’T fix the issue. A factory reset can be done by holding down the power button on the Chromecast for 25 seconds until the light on the device flashes or via the Chromecast app (detailed walkthrough here).

It’s also worth checking that it’s running the latest firmware (31432 as of May 22nd 2015, according to Wikipedia) – it should update automatically (and in fact you can’t stop it doing so which isn’t ideal) but sometimes a factory reset gives it the kick up the proverbial it needs to update. If you need help the official Google Chromecast forum is a good place to start as is the online troubleshooting wizard.