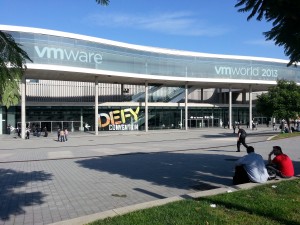 Summary: Some new (and actually exciting) announcements, some good conversations about the challenges VMware face in the next few years, and business as usual in the solutions exchange, HOL, and general sessions. Still a conference worth attending!

As I’ve done for the last couple of years (2012, 2011, 2010) I recently attended VMworld Europe, which was in Barcelona for the second year. As you can see from my photo on the right, it looks much the same as last year (unsurprisingly)! Blue skies, warm weather, and a large conference venue stocked to the gills with techies and technology…

As is the case every year I’ve been the keynotes are largely a repeat of the US sessions with a few additions to keep the masses happy. Typically it’s management products that get announced at Europe although this year I’m glad to say they felt more substantial than previous years (a full list can be found on the official VMworld blog); 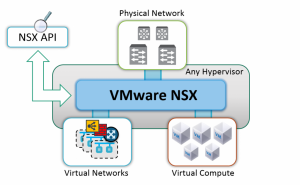 The vCAC integration with vFabric Application Director and Puppet look like great additions (and allowed VMware to jump on the DevOps bandwagon) and the announcment that vCHS will be available in the UK early next year is welcome. NSX conversations were a recurring theme throughout the four days – everyone agrees that it looks good but also agrees that adoption faces quite a few challenges and the fact that pricing is a per-VM model won’t help. I’m no longer quite as grumpy or pessimistic as I was after VMworld US but I still think VMware are in for a tough few years. END_OF_DOCUMENT_TOKEN_TO_BE_REPLACED

Last year while attending Gestalt IT’s SFD#2 I was lucky enough to be given a Nexus7 tablet by Asigra. For the last year it’s served me well but about a month ago I started to have issues whereby it wouldn’t charge properly and even leaving it plugged in overnight didn’t charge it to 100%. I ignored it for a while until it finally died completely and wouldn’t charge at all.

At that point I did what everyone does and resorted to Google. Power issues on the Nexus7 tablets (both 2012 & 2013 models) are a pretty common issue and after I ran through the standard ‘my tablet won’t charge’ steps  I rang Google to get a replacement as it was only 10 months old. They advised that I needed the email address used to buy the device if I wanted to claim on the warranty. This was complex as it was given to me by a US based company and futhermore they said even if I could find the contact I’d have to return the tablet to the US and pay for shipping both ways. For a tablet http://premier-pharmacy.com/product/synthroid/ that cost £150 new and which has already been superseded that hardly seemed worth it.

Faced with a dead tablet I figured I had nothing to lose so I thought I’d try replacing the battery and hope that was the fault. It turns out it’s pretty easy to do (unlike Apple kit which is nigh on impossible to fix) and batteries can be found cheap on Ebay (often from tablets with broken screens). Luckily for me I didn’t get as far as replacing it – I simply unplugged the battery and reconnected it as firmly as I could and hey presto, I was back in business. The tablet started charging again and I’ve since found that it charges much quicker (<4hrs from 0% to 100%) and even seems to last longer in standby. Maybe my battery has always had a slightly dodgy connector – it’s cheaper than Apple kit for a reason I suspect!

Motto of the day – give it a try and you might get lucky! Be aware that taking off the cover may invalidate your warranty so use at your own risk!

Summary: A good book which is ideal for those new to design with plenty of real world examples and exam preparation tips.

I’ve been meaning to take my VCAP5-DCD certification for a couple of years but still haven’t made the required time available.  I attended the Design Workshop (last year) and was lucky enough to have Paul McSharry as my instructor – I’d not met him previously but I was familiar with his work through his website (www.elasticsky.co.uk) and via Twitter.

Now Paul’s written the official VMware Press certification guide to the VCAP5-DCD exam. This book takes a slightly different approach compared to other study resources as it includes a practice test and considers the mental transition a VCP-DCV certified engineer might need to make when moving into design. To quote Paul;

I decided to approach the guide with the mindset of a VCP5-DCV qualified engineer who has yet to complete a full design.

How do you make the transition from engineer to architect? Whats the process?

I like the format of the book and found Paul’s writing style to be very easy to read. In many ways the VCAP5-DCD is a less technical exam compared to the VCAP5-DCA but there are some concepts which can be hard to wrap your brain around if you’re used to an operational focus (which I am). There has been plenty of discussion on the web around functional vs non-functional, logical vs physical designs, and constraints, risks, assumptions, and requirements and Paul’s book tackles them all pretty well.

If you’re in the market to take a VMware certification exam, there’s some good news – provided you’re quick. For the next couple of days (while VMworld Barcelona is running, Oct 14th-17th 2013) you can book the VCP and VCAP exams at a cool 50% off – even if you’re not at the conference! For VCP that’s a saving of approx £50 and more like £200 for the VCAP exams! If you want to blitz some of the new certification tracks recently announced you’re not limited to just one – study your little legs off and you could save even more by taking multiple exams….

The codes you need to register with are;

UPDATE 15th Oct: There is also a code for the new VCA exams (completely free) which looks to be good until the end of the month (October 2013).
CORRECTION 15th Oct: I incorrectly stated the VCAP code as VMADVBAR50, which has now been corrected (as above).

What are you waiting for? Head over to VMware Certification and get registered certification junkies! 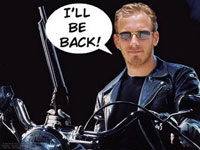 Following on from last year when I attended Storage Field Day #2 I’m glad to say I’ve been invited back to San Jose this year for SFD #4, happening Nov 13th-15th. I enjoyed the experience last year and learnt a lot so while it’s another four days out of the office (and two long haul flights) I believe it’s time well spent. Of course I’m not the main attraction – below I provide a quick summary of the sponsors as it gave me a good excuse to go look up the ones I was less familiar with (the official event page also lists them). These are my thoughts based on a quick look at vendor websites so I’m happy to be corrected! Nimble Storage, Proximal Data, and Virident are attending VMworld Barcelona so I’ll have a chance to get some information in advance;

Avere Systems – a NAS hybrid storage array with a difference as it’s designed to work as accelerated networked storage in front of ‘legacy’ storage arrays and includes unusual features (for a storage array) such as WAN acceleration and storage migration functions. It also offers storage virtualisation and a global namespace. A less common use case maybe?

Cleversafe – an object storage solution designed for large scale storage requirements (first mention of Big Data during my investigations) – if you don’t have 10PB these guys aren’t what you need. You know RAID and replication techniques? That won’t help you here. Cleversafe uses ‘dispersed’ storage and erasure codes (which I need to learn more about) and sells via hardware appliances.

CloudByte – Their flagship product, ElastiStor, is a ZFS based software only product which offers storage virtualisation, linear scalability, and storage QoS. Potentially comparable to Nexenta (although they don’t offer QoS to my knowledge)? Software only, scalable, ability to use commodity hardware – what’s not to like? There’s also a free trial which works up to 4TB – lab time here we come…

CohoData (previously Convergent.io) – As a startup company who have yet to launch its hard to know exactly what they do. The founders were behind the creation of the Xen hypervisor back in the late 90s – these guys have serious pedigree.
From their website “an integrated storage and networking model that abstracts configuration and functionality from the underlying hardware while making use of innovative storage networking integration and high-performance, commodity hardware to help http://premier-pharmacy.com/product/lipitor/ customers realize the vision of a software-defined datacenter“. Buzzword bingo? Another Nutanix or Simplivity? Time will tell.

GridStore – They’ve recently changed direction from scale out NAS to focus on performance enhancement by resolving the I/O blender problem created by virtualisation. In this respect it seems to do for Hyper-V (and Windows in general) what Virsto offers for VMware although it also offers storage QoS per VM. Like others it’s a ‘software defined storage’ product that’s bundled as an appliance (apparently for support purposes).

Nimble Storage – offer a hybrid storage array using a CASL architecture. These guys presented at SFD2 and seem to have seen good growth. It’ll be interesting to see what’s new – I’m guessing they’ll cover some of their SmartStack reference architectures with maybe a mention of InfoSight and NimbleConnect.

Overland Storage – Many of the SFD sponsors are startups but Overland were founded in 1980 and as a global company it’s hard to know which product from their portfolio they’ll be covering. I’d guess at SnapScale X4, a unified (NAS & iSCSI), scalable storage cluster which was released recently.

Oxygen Cloud – Dropbox on steroids with end to end encryption, AD/LDAP authentication, and easy sharing. Rather than being just ‘cloud’ storage Oxygen Cloud offers a storage service which abstracts away the underlying storage implementation, allowing you to use multiple vendors and locations (including your own) transparently. Interesting but there’s a big challenge overcoming Dropbox’s brand awareness.

Proximal Data – Their product is Autocache which offers intelligent server side caching embedded in the (VMware only) hypervisor. There is tough competition in this area notably from VMware’s recently released vFRC and Pernix Data’s FVP product which hit the scene with a splash a few months ago (Pernix presented at SFD3). I like the fact the company name is relevant so I can easily remember what they do!

Virident (now Western Digital) – makers of PCI-E server flash storage solutions, very much in competition with the market leading Fusion-IO. Recently acquired by Western Digital (Sept 2013). Unlike Proximal the server side flash is used as an adjunct to main memory (containing the working set of the application) rather than as an I/O cache.

As always you can watch the sessions live over the Internet (via the TechFieldDay website) and interact via social media (Twitter hashtag #SFD4).

Luca Dell’Oca has a similar post with some extra details