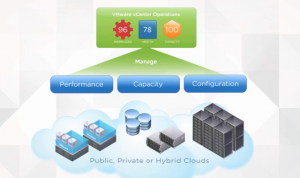 You can get a 60 day evaluation of the Enterprise version, giving you more features compared to the previous version’s trial which was the Standard edition. Also similar to the previous version, vCOps is packaged as an appliance in the .OVF format but instead of a single VM there are now two VMs bundled as a vApp. The first is a front end server for the UI and the second is dedicated to the patented analytics engine. There is a standalone install as opposed to the vApp but it seems to be an edge case and comes with a few drawbacks (as per this discussion on the vCOps forums).
NOTE: The 60 days start from when you register for the trail, NOT when you install the vApp so only register when you’re ready to start your eval.

Before we get into the specifics it’s worth bearing in mind a summary of the different versions of vCOps. NOTE: there is a single download – the license determines the edition and hence the features;

You can see a full feature breakdown via VMware’s feature summary and version matrix. Both Standard, Advanced and Enterprise are licensed ‘per VM’ whereas Enterprise+ is negotiable! There is a version of vCOps especially designed for View environments but it’s currently in beta with no official release date.

The Enterprise and Enterprise+ editions can work with third party plugins which allow them to operate with a variety of alternative products. The list of adapters as of March 2012 includes products from Microsoft, BMC, Oracle, Netapp, EMC, HP, IBM, and VMware’s Hyperic suite. As a Netapp customer I’d love to see what value combining vCOps with Netapp metrics could deliver although I’m not likely to go Enterprise anytime soon due to the cost. Enterprise+ licensing costs aren’t published on the VMware website but Enterprise is £195 per VM so for a 1000VM estate you’re looking at nearly £200,000. At those prices you’re competing with the big boys (Microsoft’s System Center suite, Oracle Enterprise Manager, IBM Tivoli, Netuitive etc) all of whom have more mature products with an existing customer base. I know I’d be up against Oracle’s offering and I know which will win (even if only for political reasons) and it’s not VMware!
NOTE: The Netapp adapter notes detail the metrics it’ll collect and a rough architecture for those who are interested!

It’s worth noting that the resource http://premier-pharmacy.com/product/crestor/ requirements online pharmacy ahmedabad have increased although you tailor them by selecting one of three sizes (based on the number of VMs you need to analyze);

The significant storage requirement is for the performance heavy metrics store (which is why VMware recommend eager-zeroed thick provisioning). vSphere5 includes over a hundred new metrics and vCOps analyses more than its predecessor which means more information (and more storage required!). By using a proprietary database specially designed to store time-series information VMware claim to have improved performance compared a traditional relational database (by a factor of ten or more) or even Hadoop!. Interestingly Kit Colbert states (in VMworld presentation CIM2452) that vCOps queries the hosts directly NOT the vCenter database as I previously thought although permissions are assigned in vCenter.

A new feature is the ability for a single vCOps install to monitor multiple vCenters (both Windows and the Linux appliance) which is certainly welcome. The requirements for this aren’t overly clear from the documentation – while it will detect vCenters using Linked-Mode during the setup wizard it doesn’t use the Linked-Mode to get statistics and you can monitor multiple vCenters even if they aren’t in Linked-Mode. The single set of credentials you provide must have access to every vCenter you register so potentially two vCenters in the same domain but not in Linked-Mode would be fine. I was concerned that collecting statistics from a remote vCenter (or hosts as it goes direct) over a WAN might degrade performance but after some tests I found it made a negligible difference (my WAN latency was <10ms). Nice!

The product integration has been greatly improved for the capacity, configuration, and chargeback features and you can now upgrade from one version to another more easily. This change does mean there are some caveats around upgrades however, especially if you previously had multiple products such as CapacityIQ and Configuration Manager running separately.

The deployment is straightforward as it’s wizard driven but you will need to create IP pools in vCenter BEFORE you start the deployment. IP pools are covered in the install video from VMware and the official deployment docs which also cover further requirements (vCenter and vSphere versions, port requirements etc). You can read more about how network attributes are passed to vApp VM’s but bear in mind that changing the IPs for a vApp VM isn’t always straightforward. 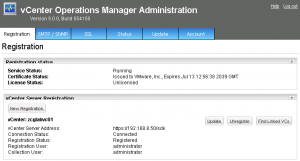 NOTE: The use of a vApp does mean deployment in environments without DRS (a requirement for resource pools and hence vApps) is more convoluted. See VMwareKB2013695.

With the IP details sorted you then follow the usual vApp deployment process. Once the vApp is deployed you can configure various settings from the web administration page (https://<UI VM’s IP address>/admin/), although only the first of the below actions is required;

The last step is to add your vCOps license (using the VI client) in the vCenter licensing portal. Make sure you’ve deployed the appliance before you try adding the license key otherwise you’ll get an error as per VMwareKB1000609.

If you run into any issues check the release notes as there are a few gotchas for certain environments.

You can read more in part 2 about day to day use of vCOps while the final part will cover the capacity features along with pricing considerations and my conclusions about the product.

vCOPS in 5 mins – an amusing overview from VMware! (marketing rather than technical)