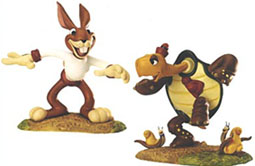 Having had some time to digest at the announcements from VMworld 2012 (day one, day two) I was reminded of the childrens story about the hare and the tortoise. Yes it’s another ‘analogy post’ but otherwise technology can be so bland! 🙂

The story tells of a hare that can run so fast, no-one can beat him. The tortoise, slow moving by nature, challenges the hare to a race and the hare, laughing, accepts knowing he can beat the tortoise with ease. On the day of the race they line up. Bang! The starter’s pistol goes and off goes the hare, charging into the lead. After a while he looks back to see the tortoise miles behind. Seeing how much time he has he decides to take a quick sleep under a nearby tree. When he wakes however he realises that the tortoise has passed him by and he’s unable to catch up so loses the race. While not a perfect analogy I think VMware is the hare and their customers the slow moving tortoise (no, the tortoise is not Microsoft, how unkind…). VMware are creating technologies and an ecosystem at a speed which customers are struggling to adopt, and much of this week’s developments are because of this imbalance (or ‘virtual stall’ as Andi Mann coined it). Pat Gelsinger, the incoming CEO at VMware was quoted comparing the company to ‘an adolescent who has grown too quickly’ because their operational rigour hasn’t kept pace with the company’s growth. It’s not only customers who are grappling with the pace of change.

Let’s look at pricing. VMware have binned the consumption based vRAM licencing scheme and reverted to their per socket model used prior to vSphere5. This was an unpopular scheme and with Microsoft’s Hyper-V hot on VMware’s heels I think VMware realised that to stay competitive they had to react. While many applauded the u-turn it’s been pointed out that the future of cloud is all about charging for usage (here and here) so maybe VMware were just ahead of their target market? If the dynamic environments promised by IaaS were commonplace then maybe Microsoft would have been amending their licencing rather than VMware making an embarrassing (though brave) climbdown.

VMware still have the dominant virtualisation portfolio, certainly within the enterprise, but they need to leverage it to maintain their premium pricing and hence profitability. Products such as vCloud Director, vFabric, and vCOPs haven’t seen the uptake VMware were hoping for and without these ‘value add’ tiers the core virtualisation product isn’t remarkable enough to counter the threat from rivals like Microsoft and the open source community. People have been wondering when Hyper-V and Xen will be ‘good enough‘ for a couple of years and many think the time is now. VMware have the technology and the vision but many customers aren’t ready to implement it. We’re still talking about only 60% of server workloads being virtual, and getting tier 1 apps like Oracle virtual is taking a long time (due to FUD and Oracle’s desire to own the whole stack as well as technical http://premier-pharmacy.com/product-category/cholesterol-lowering/ factors). Automate my workflows? My company are still struggling to even define new manual workflows and processes given the huge changes that virtualisation brings to any large company. Move to the cloud? Half our production servers are still physical. VMware still have a strong market position but the longer customers take to move to the new technologies, the greater the opportunity for competitors. The hypervisor is already a commodity – if customers take many years to move to the next stage then the management stack that VMware are now pushing may also be a commodity.

VMware need their customers to accelerate their move to the cloud before their product line becomes a commodity. How are VMware tackling this?

Is it out of VMware’s hands? 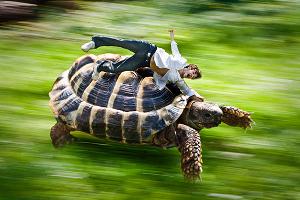 Obviously VMware can use the above actions to spur adoption to their cloud specifically (to speed up the tortoise in my analogy!) but mainly it’s market forces which will drive the change – ‘cloud’ is one the hottest areas and is set to grow. Speed may be the key – if the enterprise masses don’t migrate to the cloud for another 5-10 years there will be increased competition and VMware risk losing the premium value in their products and potentially their stellar profits. If we’re still talking about virtualising tier 1 apps, the year of VDI, and how to integrate a full cloud stack in another couple of years (which I suspect we will be) it’ll be interesting to see if VMware can maintain the place on their top of the podium. Despite cloud being considered mainstream I think there are many who remain tortoises, plodding along. And in the original Aesop’s fable it’s the ‘slow and steady’ which win…

Right Here, Right Now is the tagline for this year’s conference. To use another FatBoySlim title I’d say “Halfway between the gutter and the stars” is more appropriate.